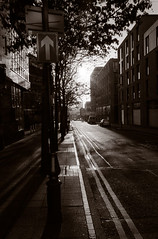 street01
Originally uploaded by johanna n.
Distressing stuff going on, but I'll restrict myself to this photograph for now.

We've got a new lecturer/tutor for two of our modules and her name is ...dundundun... Johanna! She's got German blood rather than Swedish, though (she's lived in England all her life, I think). But her partner apparently grew up in Sweden.

As of last night I am back in da UK.

I take less and less photographs. I don't really enjoy it anymore, (which I don't think is because I truly have no interest in it, but because of circumstances etc.) and mostly feel miserable about it. I feel very pressurised, and that makes it very hard for me to do anything, as I am scared of failing. (Although the latter could be true of anything, I suppose, not just photography).

I have been trying to tell myself that seeing as this year doesn't count towards the actual degree, all I need to do is to pass and as long as I do that, it's okay. BUT people then tell me that SURELY I have higher standards than THAT? I know that they say that because they think that I am capable of more than a 'mere' pass and also that they perhaps do not see why I try to have that approach, but it does make me feel even worse about the situation.

I don't know how to get round this - I've spoken to my tutors (last term) but it wasn't really that helpful in terms making me see things in a different light and feel differently about it all.

Maybe it's not for me. I told myself I'd do at least the first year. But I think I am really going to struggle. One of my weaknesses is that I can't make myself do something I really don't want to do,and it feels like I have already decided deep down that I don't want to do it, but that I don't quite want to admit that to myself. (Because that would be failure.)

I'm really unhappy about what's happened to my camera and at the moment it looks like I will probably leave it behind as I have a lot of stuff to take back to England and I will be pushing it with the weight limits anyway. Seeing as there are medium format cameras to borrow at university, it's not like I won't be able to use one in the meantime, anyway (if I do leave it behind I'll probably try and get it all sorted out at Easter, or at the very least bring it back to England with me).

I've done about 1/2 of the packing so far - or rather, I've put most things in the suitcase(s), but I haven't weighed them yet and I am not entirely decided on which things to bring and which things to leave behind ...

I've just had dinner (pancakes with whipped cream and cloudberry jam!) and am now sitting here with a cup of tea with honey in (for my throat). I'd better get back to the packing soon though, and I could really do with doing a bit of research for an essay later on as well.

Last night I had a dream that included

leeneh and cats! I don't remember much else about it, though.

I feel extremely frustrated right now. I may have well broken my Hasselblad just. I really can't believe I did this, or I can because I am about the clumsiest person on the planet. But aaaarghh! This could cost me a lot of money to repair. I think it's a case of the shutter having jammed, which isn't too uncommon in Hasselblads, and there are webpages out there on how to fix it. However, my Hasselblad is a bit of an unusual model, so those tutorials are no good to me.

My Christmas hols haven't exactly reinforced the idea that I really -should- be a photographer, and this is just too much right now.

I don't normally have much separation anxiety, but ooooouch ...

1. Woke up with a cold yesterday. Drinking lots of c vitamin (smoothie!) right now.
2. Because of said cold and because I feel seriously confused (but mostly, I think, because of the cold) I tossed and turned until about 4am. Ugh.
3. I could really do with some guidance and advice but I'm not sure who to talk to. Well, that's not entirely true - there are several people I could talk to, but as I don't trust myself to make a 'good' decision, I usually don't feel much wiser anyway.
4.Everybody complimented me on my dress yesterday, and my Mum did my hair really nicely. I might have some photos later, but it won't show well, as it's all at the sides and back.
5. I am dyeing my hair tomorrow. I'm expecting it to turn out sort of mahogany-ish.

1. I bought lots of fruit yesterday, so now I am enjoying a mango, banana and blood orange smoothie.
2. I weighed myself this morning. Apparently I have only put on 2 pounds since I arrived in Sweden. Considering the extreme (and I mean it) amounts of food I have been eating, I am very (surprised and) impressed. Next week I should be back on track again, though.
3. I am meeting up with my friend Louisa for lunch in town today. I can't borrow Mum's car so I have to catch the bus. 33 SEK for a single, apparently. Oerr!
4. Birthday tomorrow. I don't have any exciting plans, but will spend most of the day at Mum's before having to dinner at Dad's with the family (grandparents, uncles, aunt + cousin) in the evening.
5. It snowed yesterday, but only enough to give the ground a light dusting. Pfft. It's -very- icy, though. Ice + rain = bad, bad idea.
Collapse